I thought I’d share a little history from my perspective, about the Jacob’s Well project.

To me the Jacob’s Well project is a wonderful example of how God can work.

When I joined Vision House in 2007 the land had been purchased and plans were being made. Then the stock and real estate markets dropped significantly in value causing our major funders to back out and we were left with a piece of dirt that probably wasn’t worth what we owed on it. In late 2008 and early 2009 I’m sitting here thinking the project is dead; I’m wondering how we’re going to unwind this thing and how all of that is going to impact Vision House. 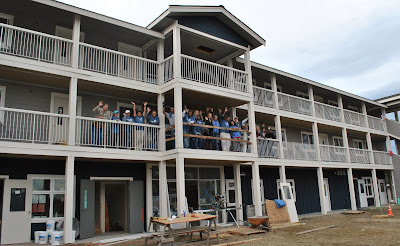 In late 2009 or early 2010 after trying to do it the only way we know how, God placed on Susan’s heart and she shared with the staff that we were going to get out of God’s way and that if He wanted this project completed

He would provide and we’d follow. We would raise a little money, build a little and continue that process as He provided. Some probably thought we were crazy because I don’t think we ever had much over a couple hundred thousand in the bank at any given time allocated for this $2 million plus project.

God brought people and resources to the project. Early spring dirt started moving and we had a ground breaking in April 2010. Soon thereafter the foundation was poured. At the bottom of this article is a picture I took in August 2010 when they poured the slab. Then Susan had this crazy idea that we’d just get a bunch of volunteers like an extreme home makeover and start framing. That actually happened and we started framing the first Saturday in April 2011. That amazing group of folks returned every Saturday and by the end of May the three-story almost 20,000 square foot building was all framed up. The picture at the top is one I took in late May 2011 of the framed complex. A book could be written about all of the people and organizations that were lead to participate.Another year passes and by late 2012 the doors and windows are in and paint is on. The 2nd picture shows the building in late 2012. It looks good on the outside. A lot has been done on the inside, but there is still a lot of work to do. The process continues and in September 2013 we have our grand opening. The picture below is one that I took at that event. And it only took 3 ½ years from when we first started moving dirt… 🙂 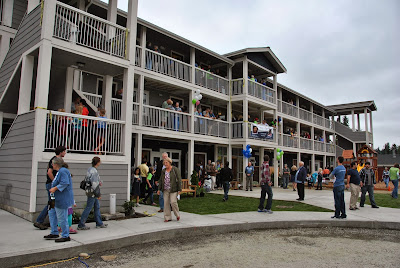 So when Susan (Vision House co-founder and executive director) says we got our temporary occupancy permit, which hopefully will happen soon, it not only will be a day to celebrate but will also be a day I’ll remember for a long time. If we’d gotten a construction loan we could have completed the project quickly, but we would be paying on it for years, and the many people and organizations would have missed the opportunity to get involved. Many were blessed to be involved… including me. Other than some remaining debt relating to the original purchase of the land this project was built 100% with donated time, materials and contributions. Debt free! The challenge, and great lesson learned, is about patience and waiting on God…  Now I just wonder what’s next… 🙂

This is what I’m thinking about, and maybe explains a little about why this projects means so much to me… 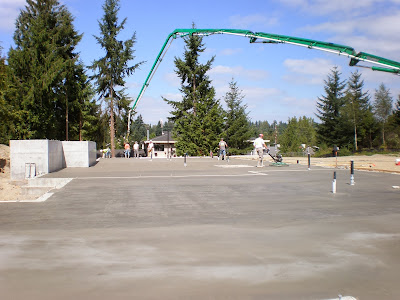 There was a loud cheer from over 300 people at the new Vision House complex, Jacob’s Well, for homeless mothers and their children. The ribbon cutting celebration and work party on Sunday, September 15th from 1:00 – 4:00pm was a great success!

The Jacob’s Well BBQ on June 13th, sponsored by our project partner Campbell Nelson Nissan & VW, blew us away on a number of levels.

… until every child has a home.